Glass and mirrors - A rich history

Glass probably exists since the beginnings of time, formed as a result of high temperature .... Glass history »»

The Romans have made it possible that the knowledge of making glass could be spread so quick and in such a large area. With its conquests, trade relations, road building, ....Glass history Part II »»

It was not until the latter stages of the Industrial Revolution, however, that mechanical technology for mass production and in-depth scientific research into the relationship between the composition of glass and its physical qualities began to appear in the industry.....Glass history Part III »»

The history of mirrors

Mirrors are used by man long befor the discovery of making glass. Made of metal ....Mirror history »»

The history of Glass - Part 2

The Romans also did much to spread glassmaking technology. With its conquests, trade relations, road building, and effective political and economical administration, the Roman Empire created the conditions for the flourishing of glassworks across western Europe and the Mediterranean. During the reign of the emperor Augustus, glass objects began to appear throughout Italy, in France, Germany and Switzerland. Roman glass has even been found as far afield as China, shipped there along the silk routes. 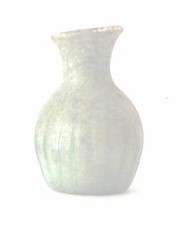 It was the Romans who began to use glass for architectural purposes, with the discovery of clear glass (through the introduction of manganese oxide) in Alexandria around AD 100. Cast glass windows, albeit with poor optical qualities, thus began to appear in the most important buildings in Rome and the most luxurious villas of Herculaneum and Pompeii.

With the geographical division of the empires, glass craftsmen began to migrate less, and eastern and western glassware gradually acquired more distinct characteristics. Alexandria remained the most important glassmaking area in the East, producing luxury glass items mainly for export. The world famous Portland Vase is perhaps the finest known example of Alexandrian skills. In Rome's Western empire, the city of Köln in the Rhineland developed as the hub of the glassmaking industry, adopting, however, mainly eastern techniques. Then, the decline of the Roman Empire and culture slowed progress in the field of glassmaking techniques, particularly through the 5th century. Germanic glassware became less ornate, with craftsmen abandoning or not developing the decorating skills they had acquired.

Archaeological excavations on the island of Torcello near Venice, Italy, have unearthed objects from the late 7th and early 8th centuries which bear witness to the transition from ancient to early Middle Ages production of glass.

Towards the year 1000, a significant change in European glassmaking techniques took place. Given the difficulties in importing raw materials, soda glass was gradually replaced by glass made using the potash obtained from the burning of trees.

At this point, glass made north of the Alps began to differ from glass made in the Mediterranean area, with Italy, for example, sticking to soda ash as its dominant raw material.

The 11th century also saw the development by German glass craftsmen of a technique - then further developed by Venetian craftsmen in the 13th century - for the production of glass sheets. By blowing a hollow glass sphere and swinging it vertically, gravity would pull the glass into a cylindrical "pod" measuring as much as 3 metres long, with a width of up to 45 cm. While still hot, the ends of the pod were cut off and the resulting cylinder cut lengthways and laid flat. Other types of sheet glass included crown glass (also known as "bullions"), relatively common across western Europe. With this technique, a glass ball was blown and then opened outwards on the opposite side to the pipe. Spinning the semi-molten ball then caused it to flatten and increase in size, but only up to a limited diameter. The panes thus created would then be joined with lead strips and pieced together to create windows. Glazing remained, however, a great luxury up to the late Middle Ages, with royal palaces and churches the most likely buildings to have glass windows. Stained glass windows reached their peak as the Middle Ages drew to a close, with an increasing number of public buildings, inns and the homes of the wealthy fitted with clear or coloured glass decorated with historical scenes and coats of arms.

In the Middle Ages, the Italian city of Venice assumed its role as the glassmaking centre of the western world. The Venetian merchant fleet ruled the Mediterranean waves and helped supply Venice's glass craftsmen with the technical know-how of their counterparts in Syria, and with the artistic influence of Islam.

The importance of the glass industry in Venice can be seen not only in the number of craftsmen at work there (more than 8,000 at one point). A 1271 ordinance, a type of glass sector statute, laid down certain protectionist measures such as a ban on imports of foreign glass and a ban on foreign glassmakers who wished to work in Venice: non-Venetian craftsmen were themselves clearly sufficiently skilled to pose a threat.

Until the end of the 13th century, most glassmaking in Venice took place in the city itself. However, the frequent fires caused by the furnaces led the city authorities, in 1291, to order the transfer of glassmaking to the island of Murano. The measure also made it easier for the city to keep an eye on what was one of its main assets, ensuring that no glassmaking skills or secrets were exported.

In the 14th century, another important Italian glassmaking industry developed at Altare, near Genoa. Its importance lies largely in the fact that it was not subject to the strict statutes of Venice as regards the exporting of glass working skills. Thus, during the 16th century, craftsmen from Altare helped extend the new styles and techniques of Italian glass to other parts of Europe, particularly France.

In the second half of the 15th century, the craftsmen of Murano started using quartz sand and potash made from sea plants to produce particularly pure crystal. By the end of the 16th century, 3,000 of the island's 7,000 inhabitants were involved in some way in the glassmaking industry.

The development of lead crystal has been attributed to the English glassmaker George Ravenscroft (1618-1681), who patented his new glass in 1674. He had been commissioned to find a substitute for the Venetian crystal produced in Murano and based on pure quartz sand and potash. By using higher proportions of lead oxide instead of potash, he succeeded in producing a brilliant glass with a high refractive index which was very well suited for deep cutting and engraving.

In 1688, in France, a new process was developed for the production of plate glass, principally for use in mirrors, whose optical qualities had, until then, left much to be desired.

The molten glass was poured onto a special table and rolled out flat. After cooling, the plate glass was ground on large round tables by means of rotating cast iron discs and increasingly fine abrasive sands, and then polished using felt disks. The result of this "plate pouring" process was flat glass with good optical transmission qualities. When coated on one side with a reflective, low melting metal, high-quality mirrors could be produced.

France also took steps to promote its own glass industry and attract glass experts from Venice; not an easy move for Venetians keen on exporting their abilities and know-how, given the history of discouragement of such behaviour (at one point, Venetian glass craftsmen faced death threats if they disclosed glassmaking secrets or took their skills abroad).

The French court, for its part, placed heavy duties on glass imports and offered Venetian glassmakers a number of incentives: French nationality after eight years and total exemption from taxes, to name just two.

«« The discovery of glass